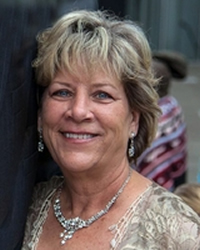 Sally Deane was born in the Parkview neighborhood on the South Side of Chicago on December 21, 1954. She grew up in Chicago with a large and loving family headed by her mother Rose and father Paul. Sally is one of thirteen children with six brothers and six sisters. Her close-knit family has continued to grow over the years by virtue of her four beautiful children and seven marvelous grandchildren!

Sally has been a Licensed Practical Nurse for over 35 years after graduating in 1979 from Omaha Metro Tech and is currently living in Cocoa, Florida. She has been a practicing nurse in various medical fields over the years including time spent in long-term care facilities working with the dying and their families. Sally’s own experiences with the death (or transitioning as she prefers to call it) of her own loved ones prompted her to write two books on the subject. The first book takes place during the time of her father’s declining health and death; it discusses how every member of a family can cope with loss and grief differently. The second book was written after the death of her late husband Paul and details their charming love story and the journey they shared during his time with cancer.

With the passing of former patients and the transitioning of her own family members, Sally has gained a tremendous amount of experience bringing comfort to people with chronic or terminal illnesses. She has held loved ones and patients at the moments before, during, and after their deaths; both her mother and her husband Paul died peacefully in her arms as they took their last breath. It is Sally’s hope to share her personal experiences and all the knowledge she’s acquired so that others who are going through similar experiences can benefit from all she’s come to learn.

Sally’s niece Michelle died of breast cancer at the age of 40. Since Michelle lived close by, Sally was able to share Michelle’s cancer journey with her the whole way. Michelle’s strength, endurance, and refusal to give up were an inspiration to every member of Michelle’s family and many young breast cancer survivors.

Only six months after Michelle’s transition, Sally’s husband Paul was diagnosed with a form of cancer called GIST soft tissue sarcoma (a gastrointestinal stromal tumor). It seemed as though her family and friends could not escape grief. Determined to fight for more time together, Paul and Sally spent seven years finding the best treatments for GIST. Cancer did not stop them from cherishing every moment of their marriage. Every morning they woke up together, they shared the morning prayer: “I’m so grateful you’re in my life.” Marriage and cancer—yes the two can go together.

Sally has come to view illness, death, and loss as a “transition” from one part of life to the next. She hopes to use her wisdom and experiences to help guide others through this difficult time in their lives with a philosophy she calls Transitional Navigation. She teaches Transitional Navigation to guide people living with a chronic illness as well as their grieving loved-ones to begin a new life filled with love and light.